02/02/2016
A family portrait
As usual, studio time over Christmas and New Year was at a premium, but I have been able to complete a commission for a family portrait which has been occupying me for a while. I don’t often go ‘off piste’ but sometimes it is surprisingly refreshing to work with a sympathetic client and have a strict set of parameters. This client wanted to commemorate her family, and the time they have spent together in a favourite local park. While she liked my triptych key [805630] doesn't existTHAT SUMMER incorporating monoprint techniques into an inkjet print, we eventually agreed on a more photographic approach. For the ‘ground’ I explored a technique I started working with last year, monoprint screen printing, using both conventional screen printing inks and also watercolour,
. 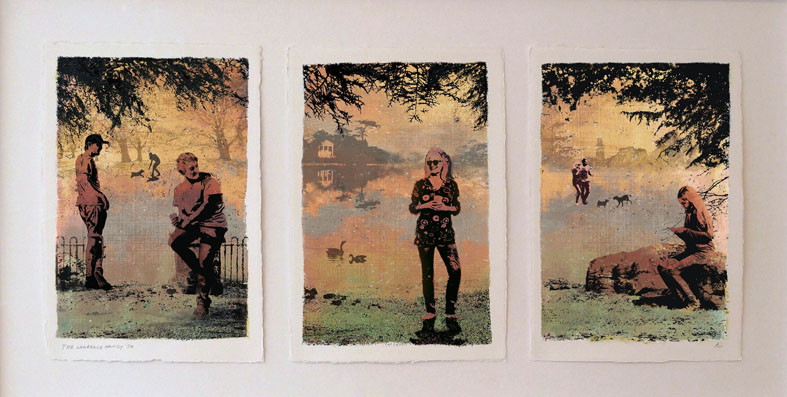 
As the composition developed, it made me reflect on how surrounding cultures influence us. I was aware from the outset that I was taking a sort of Warhol-lite approach with the combination of photographic figures and washes of intense colour – that was a deliberate strategy. But I gradually realised that older and probably deeper cultural influences were making themselves evident. The neo-Classical architectural features in the park seems to have led me to channel Thomas Gainsborough et al in the way I situated the figures in the’ landscape’. See his Mr and Mrs Andrews...

I suppose most of us brought up within the western European classical culture can’t help but see the landscape through the eyes of those who have shaped and interpreted it. So that is inevitably going to make itself felt. The choice is whether to go with it, deliberately ignore it, or actively work against it in some way. Here, I had a bit of fun with it.

And so back to the main business in hand. This year I am curating as well as making. Along with fellow Espacio member Erika Wengenroth, I will be co-curating SHIFTING STATES, an exhibition featuring both Espacio members and guest artists. More of that later.
Next
Previous