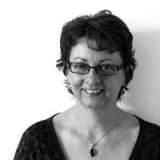 Alison studied Fine Art at the City Lit and Morley College in London for several years while pursuing her career as a television drama producer. She produced drama series and mini-series for the UK’s major broadcasters.

She is now a full-time artist and is a member of the UK Printmakers Council, and Southbank Printmakers Gallery.

Alison's work is in private and public collections in the UK and internationally. Her work as been purchased by the City Lit Institute for its own collection and she was commissioned by the London Borough of Ealing for a public art project.

In 2015 she received the St Cuthberts Mill award for a work on paper in the Discerning Eye exhibition at the Mall Galleries, London. In 2018 two of her screenprints were selected again, this time by Cherie Federico, editor of Aesthetica Magazine, and in 2020 byTabish Khan, aka@LondonArtCritic

Her screenprints PLAY and FLOAT are in the archive of the Victoria & Albert Museum in box sets of work by members of the UK Printmakers' Council.
Next
Previous